The last time I was in Phuket was 3years ago by myself, that was after a few days in Myanmar. I went there before to learn pole dance and to do some trekking. I didn’t have time to visit Phuket’s pristine beaches then.

Hence this time, when T picked a place for our holiday, I was still very much thrilled to go back there with him. I knew, this time, I would be able to visit their beaches.

We flew in together from Singapore and was picked up by the hotel transfer. Since it wasn’t check in time yet, we decided to walk around town under the blazing heat of the sun. After 2 or 3 hours of walking, we decided to have lunch and coffee in a restaurant near the beach, then we checked in.

Our accommodation was at Bangla Road, Absolute Bangla Suite. I was never sure about how this hotel works but it is somehow under a company named Absolute World. Anyway, after a few hours of rest, we then, waited for the sun to set at Patong Beach. We had dinner and our first massage for the trip and headed home.

It was so fun to see T get mesmerized while walking along Bangla Road. He has never seen something like that before. A happening road closed for parties, sexy women/men and lots of pubs and bars. His eyes were wide open like a child who went inside the Disneyland for the first time. I love this guy! He’s full of soul and child-like!

We went out a bit late just again, for walking around, lunch, and coffee. After dinner, we decided to watch Muay Thai for the first time. We both like martial arts, hence both truly enjoyed the matches that night. We made bets on who’d win the matches. We scored 4-4.

I knew that children were also doing this sport but I just didn’t prepare myself to see them really fight in front of my face. These small children were doing deadly sports like this, will it affect their development because of continued trauma to their young heads and bodies? I am not sure….

Yay! Today was our first time to really go to the beach! We just went nearby…Patong beach! We soaked with thousands of other people. Yeah, it was crowded but still, it was good. We had our breakfast, a mixture of coffee, fruits and junk food by the beach.

After which, we went home, showered and walked for about 10miuntes to the Jungceylon shopping center to watch a movie. We decided to watch 12 Strong, a true-to-life war movie which made me want to travel more to Kazakhstan and Afganistan! The mountainous areas were so breathtaking!

After the movie, we went to have dinner and headed home.

We decided we would check out less crowded beaches, hence we took a tuktuk to Paradise Beach. He priced the ride at 500 Baht (we were told that we could bargain til 300). Unexpectedly, there was a charge of 200 Baht per person to get into the said beach. No wonder it’s less crowded.

When we got in, it wasn’t crowded but there were still a bit people on the beach. Surprisingly, most of them were fit, especially the women. T enjoyed sight-seeing much. I enjoyed looking at this beautiful beach, with very fine sand and clear water. There were a few small fishes and crabs everywhere. It was beautiful. Despite being a bit expensive, I thought, going there was worth-it if one wants to escape the busier and bigger beaches. 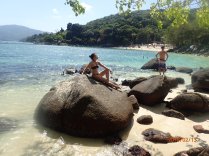 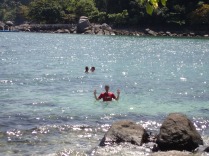 In the afternoon, we were lured into attending a talk about the Absolute World programme. It was ok but I do not want to discuss it further in this entry. After which, we had dinner, our usual Bangla road walk which I found really enjoyable especially with T, our second massage, and cocktails before concluding the night.

Oh! We also decided to plan the rest of the week this night. Next day was a city tour, day after would be to Similan Islands and then after 2days, we’d watch the Simon Cabaret show! This made me even more excited for the days ahead.

We went out late to go for our city tour. We hired a taxi for 6hours which costs 1800 Baht. We decided we wanted to visit the Big Buddha by ATV, go to Ao Nui bay for a quick swim because it was a small beach based on the map, so I thought, it would be less crowded then, to Promthep Cape for a stunning view of the sun setting by Andaman Sea.

It was my first time to ride an ATV in a real terrain, hence, I was so terrified at first. T made me feel comfortable by lying to me, saying that he was a very experienced ATV driver. Only to tell me afterward that this was the second time to ride an ATV! Luckily, we arrived at our destination, Big Buddha and back to the base safely.

We were all satisfied with the locations we decided to go to except for the Ao Nui bay. It was crowded, the water was not very clear and the beach was rocky. We didn’t anymore stay long for we didn’t really like the rocks. 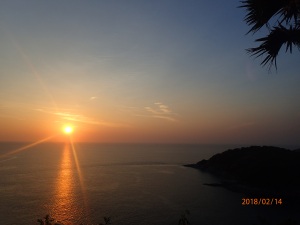 We concluded our Valentine’s day with a dinner and another massage. hahaha

We were supposed to be picked up at 6am by Sea Star company for our Similan island trip, but they turned up very late at 8am! As usual, Tim was calm, I was agitated. The road to the Pier was about 2 hours. We were late for breakfast and our boat had left thus, we were placed in a non-English boat. We had to take a 1.5hrs fast boat ride to the first island, where we snorkeled for about 20mins. Water was so clear. Reefs and fishes were visibly abundant. It was beautiful. We had lunch and visited a few more island and snorkeled for a bit more. 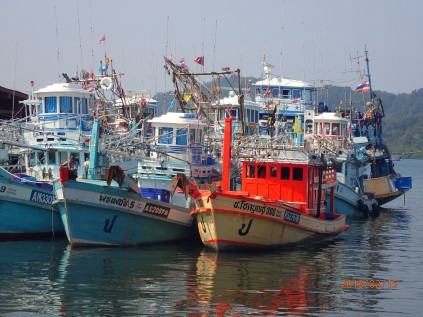 OLYMPUS DIGITAL CAMERA
Despite having a bad first impression because of their tardiness, the trip still proved worth it. Fishes were abundant as the tourists in the islands. Yes! It was , sadly, very crowded. Luckily, not many chose the snorkeling option. It was a good place for snorkeling and I just couldn’t imagine, how much more interesting it can be for diving! Visiting this island gave me the urge practice how to swim better and possibly learn diving.

We were also provided dinner before we headed home. It was a good trip! We had another dinner afterward.

Last day in Phuket. We decided we would just chill. We met up with K, an Absolute staff for breakfast before we headed up for another massage and another movie, the Black Panther which made me feel like traveling to Africa because the movie was based in a fictional African land called Wakanda. Haha

After the movie, we were picked up to watch the Simon Cabaret Show. I wasn’t impressed the first time I saw it back in 2014 and I felt the same way this time. Costumes, arrangement, and props were really good but the performers lacked energy and power. They must be tired? Performing for three shows in a row isn’t easy. T seemed unimpressed too. Anyway, I only brought him there to see how beautiful some men could be.

We had our final (for now) night walk along Bangla road and concluded the night. I was exhausted, to be honest. Tomorrow we would be picked up at 7am.

Adventure hasn’t ended.We accidentally wetted T’s passport and we thought that could be the cause of him not being able to fly with me to Singapore. Unfortunately, they found a graver reason to prevent him from flying to Singapore. His passport was no longer valid for 6months. It only passed 2 days, not even expired! T knew that he needed to renew his passport soon but he didn’t realize that it wasn’t anymore 6mos valid. Sadly, he didn’t fly with me. We had to get him a new direct ticket from Phuket to Melbourne.

This is LDR! So sad!

I have to find a job in Melbourne! I have to!

I have enjoyed my sweet time traveling for a week or more with family, friends and/or mostly, by myself. I am not used to traveling ‘together’ with a boyfriend. Surprisingly, I was as happy and excited with him. I definitely learned more about him and myself during this trip.

I’ve never actually stayed in just one place during holidays. I would always move around and transfer accommodations subsequently. This holiday was different yet it still proved enjoyable. I am certainly hoping I could still bring him along to some more places with little compromises on choices of accommodations and transportation options.