Colorless Tsukuru Tazaki and his years of Pilgrimage by Haruki Murakami

Another open-ended story. This is a story of Tsukuru and his journey to find what had happened to his childhood friends and why they alienated him from16 years ago. He didn’t persist to ask why.

He didn’t have plans to investigate further, until later in his life, after he met a girl named, Sara. Sara felt that Tsukuru was supressing something important and it’s affectecting the progression of their relationship so she helped him research about the whereabouts of his friends and helped him plan his trips to see them. For closure-sake.

There were five of them, Shiro, Kuro, Aka and Ao. Upon visiting them, he then was made informed about the reason why they decided just to suddenly estranged him. Apparently, he raped Shiro. He didn’t know. Everyone somehow took her side because it was the most convenient thing to do at that point and at the same time, Shiro was ,then, having some pychological disorder. They all knew Tsukuru didn’t do it and nobody stood up for him. Upon meeting his friends, they apologised for this. Shiro has already passed on. She was murdered. Nobody knew why she claimed that Tuskuru raped her.

Within the novel were Tsukuru’s sexual dreams about Kuro and Shiro and at one point, his male friend, Haida. Haida also, just suddenly disappeared in the story. There was also a story about a pianist who has supernatural powers of seeing auras of people. This guy’s presence in the story gave the novel it’s mysterious feel. What’s it’s significance? I am not sure.

Before he flew to Finland to meet Kuro, he saw Sara walking happily with another man. He didn’t know how to ,again, ask and handle it. He went on with his journey anyway. Tsukuru, in the end managed to obtain the closure he was looking for from Kuro.

When he came back, he looked for Sara because he wanted to tell her everything immediately and he also wanted to confess his love for her but Sara would only see her on Wednesday……The end.

Will they end up together? Will Sara choose him over the other guy? Who knows…. Murakami, i like the way you’re making me hang like this!

Anyway, here are my favourite lines from the book.

“ Jealousy-at least as far as he understood it from his dream-was the most hopeless prison in the world. Jealousy was not a place he was forced into by someone else, but a jail in which the inmate entered voluntarily, locked the door and threw away the key. And not another soul in the world knew he was locked inside. Of course if he wanted to escape, he could do so. The prison was, after all, his oen heart. But he couldn’t make that decision. His heart was as hard as a stone wall. This was the very essence of jealousy.” page 42 – very human.

“It’s a waste of time to think about things you can’t know, and things you can’t confirm even if you know them. In the final analysis, that’s no different from the slippery slope hypotheses you were talking about.” page 81

“But I do not have any confidence….Because I ahve no sense of self. I have no personality, no brilliant color. I have nothing to offer. That’s always been my problem. I feel like an empty vessel. I have a shape, I guess, as a container, but there’s nothing inside. I just can’t see myself as the right person for her. I think that the more time passes, and the more she knows about me, the more disappointed Sara will be, and the more she’ll choose to distance herself from me.” -pg 273 – I sometimes, share this feeling.

“Tokyo, meanwhile, was just the place he happened to end up. It was where he had attended school, where his job was located. Professionally it was the place he belonged, but beyond that, the city meant nothing to him. In Tokyo he lived a well-ordered, quiet life. Like a refugee in a foreign land, not making waves, not causing trouble, being ever cautious so that his residence permit was not revoked. He lived there as if he were a refugee from his own life. And Tokyo was the ideal place for someone seeking a life of anonymity.” pg 302 – feels familiar.

“Sara said she has feelings for me. He had no reason to doubt it. But there are countless things in the world for which affection is not enough. Life is long, and sometimes cruel. Sometimes, victims rae needed. Someone has to take on the role. And human bodies are fragile, easily damaged. Cut them, and they bleed.” Pg 312

“Not everything was lost in the flow of time” Pg 313

“We truly believed in something back then, and we knew we were the kind of people capable of believing in something-with all our hearts. And that kind of hope will never simply vanish.”pg 314
——- Tsukuru = Pia ———- 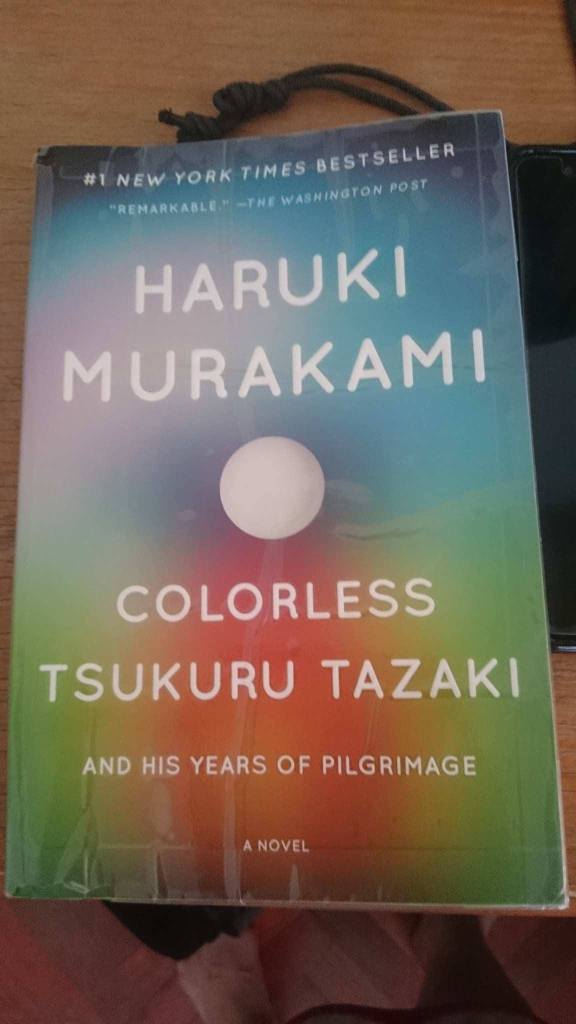