The Colours of Santorini, Greece

I wasn’t really planning on going anywhere in October because I expected that some people would visit me here in Singapore. My relatives did while R didn’t. I was a little disappointed because of that, hence, I just decided to get a flight for myself to somewhere not too expensive, two weeks before the cancelled dates I planned to spend with him.

Mongolia, Kazakhstan and the like were so pricey. I checked on Skyscanner which was the most beautiful and cheapest flight anywhere in the world and tadah, Greece came out. Hence, I chose Greece. Visa was an issue but since I was quite pro in applying for it, it came out quite easily. They gave me 2years of Schengen Visa. Yay!

Two days before y flight, R also booked a ticket going there. So, in the end, we would still meet up, only not in Singapore.

Flight from Athens to Santorini was delayed without notice. So, my plan of just taking the bus to my accommodation, Prive Suites in Perissa, changed. I arrived when it was already a little dark, hence, I just took the cab.

The location was far from those happening places like Oia and Fira. I chose it because it was the cheapest. I arrived and realised that it wasn’t so bad. It looked decent actually.

Sitting by the pool was a couple who were very friendly and helpful. They gave me a bottle of water and they enthusiastically informed me where the grocery store is. I followed the direction and bought my dinner for the night. I was kind of excited to see R again.

I woke up early. I was excited. I walked around Perissa first while waiting for R. It was his birthday, hence, I went to the nearby bakery to get him a simple cake and then the grocery to get some drinks because I knew he would be thirsty. At almost 12pm, he arrived. As usual, that weird hug occurred, but at least for me, it felt good. I was happy to see him again.

He slept a little while because he didn’t get enough the night before.

After a few hours, we headed out, took the bus to go to our first sunset in Oia. It was easily accessible by public bus, but of course, if one has his/her own transport, it would be easier and cheaper (if you aren’t doing it solo).

We walked around Oia and had our first meal in a quaint restaurant with a stunning view of the sunset, cliffs and those cycladic houses. We went back home after that. We dropped by the grocery store again to buy things then, since it’s his birthday, we/he had a few drinks in a bar near the beach. We then, ended the night. 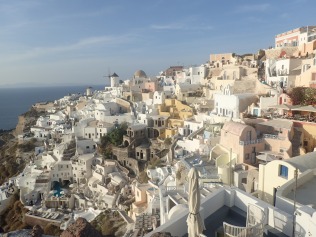 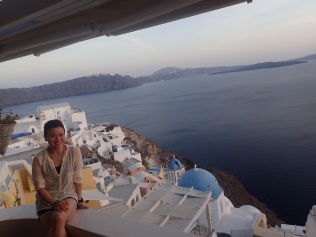 The next day, I had to go exploring the island on my own. He had to work. I took the bus to Fira. I walked around aimlessly and found the one and only Catholic church in the island, St. John the Baptist Cathedral. I silently uttered my thank yous and wishes. I then took a cable car down the Old Port. There were 2 other options in going there. One was by foot but I couldn’t find the steps hence, the cable car ride. The other one was by taking donkeys. Haha 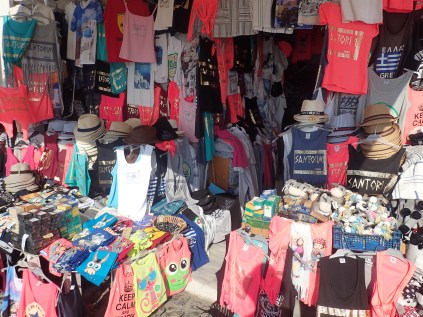 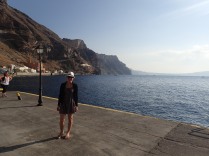 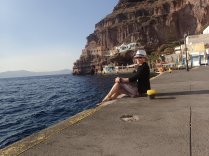 After Fira, I decided to go Imerovigli. It was so windy and I was alone in the area. The houses and the structures by the cliffs looked whiter and more posh. It looked prettier than those in Fira and Oia. Serenity of the place and the view of the sun almost setting gave me this warmth feeling of belonging, despite the strong wind blowing my mini dress away. It cleared my head a little bit. 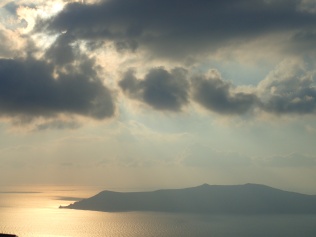 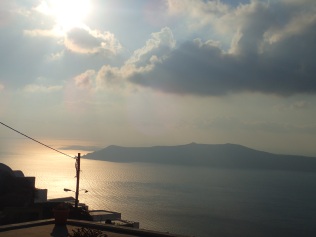 I didn’t wait for the climax of the setting sun. I just wanted to be with R. He is seldom in the same area as I am whilst sun setting is everywhere.

Sunset while I was on the bus going home 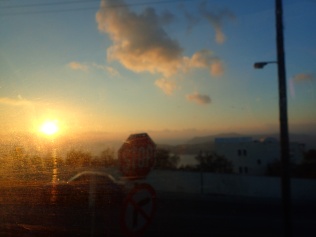 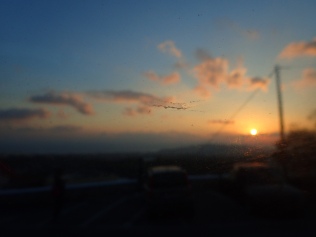 Met up and we headed out for our seafood dinner for two. I can eat a lot but despite this talent, I still find that Greeks’ serving for 2 was like serving for 4pax. So, for you not to waste food, please order with caution. Haha with ice cream for dessert and games, we ended our night.

We headed out for a walk around Perissa. We wanted to walk to Kamari but unfortunately, one has to hike to do that. He wasn’t a fan of mountains. So we just decided to take the bus to Fira.

We headed to Akrotiri to see the Red Beach. Shore was pebbled rough and small. It was beautiful from afar though. After spending a little time by the beach, we headed back to Fira. 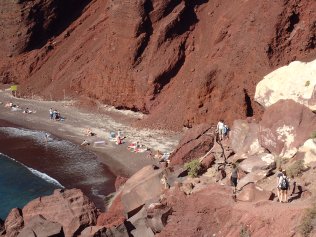 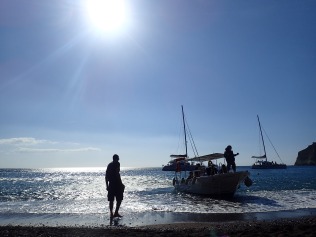 Once again, we witnessed the sun almost setting, but not quite. We had to leave before sun set again because R was determined to find his home, the pool hall. According to his search, he could find it in Kamari. Hence, we took a cab to the place. Unfortunately, it was closed already, same as most of the establishments in the area. We just decided to have dinner in a nearby restaurant. We had that serving for 2 again, all meat Greek delight. We then took a cab back to Perissa.

Our last night was over. He would be flying back to Beirut the next day, while I will be in Athens for the remaining days of the week.

Morning came, we just decided to have brunch at Tranquilo, his favorite place, under his favorite tree. And we talked and talked. Actually, he talked and I most of the time asked questions and listened. I had a great time with him. I didn’t realise that I was up for a heart-ache after these happy moments.

We left for the airport. He sent me off and I’ve never thought that, that was possibly my last time to see him…..possibly.