This elderly couple was behind me while I was queuing to buy the entrance ticket to the Acropolis.

Woman: Honey, thank you.
Man: For what?
Woman: For making this trip possible.
Man: ahhhh (sounded like he was deeply touched)…

I looked back and saw the man kissing the woman in the forehead.

I was reminded that one of the greatest ingredients for a friendship or a relationship to flourish is gratefulness.

THANK YOU is such a short expression and it’s free. Simple yet it may contribute a lot in making our relationships with anyone stronger and more long-lasting. 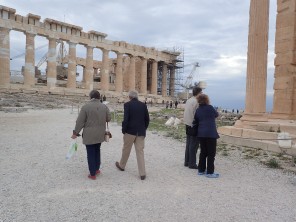 He had a funny story about learning to read the word “laughter” as a kid. He asked his teacher, why would he pronounce it as ‘laFter’ when there is obviously no F in the word. The teacher just said, just follow and read it as is.

Then, later on in life, he learned about the word “slaughter”. So, he pronounced it as ‘SlaFter’, and again, his teacher corrected him…

He was giving examples on how difficult it was for him to learn English. But he did a great job. I enjoyed his tour so much, I gave him a big tip. =b