And my fascination to these epics are still not finished, it just slowed down a little bit. It took me a while to complete reading this version. Since I’ve already read a few interpretations of Mahabharata, I didn’t really get lost very much in the story despite taking my own sweet time reading it.

I have read Ajaya and this interpretation is the Crown Prince, Duryodhana’s point of view of what happened from the shaming of Draupadi to the Pandava’s exile until the great war. I’ve gotten to know more about his character and his motivations and somehow, sympathize and empathize with him more through the book.

What’s remarkable about this version is his and Karna’s friendship. I’ve liked Karna and his character from all the other versions that I’ve read. I’ve also admired the string that bonded the two despite Karna, being actually a Pandava by blood.

Being Kunti’s eldest son before her marriage to Pandu, Karna promised his mother that he will not touch any of the Pandavas except for Arjuna. He stood by his words and let a lot of opportunities of killing the others pass. He even gave away his weapons at some point. He was called a traitor because of this. But of course, Arjuna took his life too by acting against the rules of the war (Karna was killed weaponless??? while on the ground without a chariot and a charioteer)

(I love Karna and Balarama actually!!)

During the war, in this version, it was so intense that it showed a lot of how the Pandavas could have had dominated the war. They used a lot of deceitful acts and they somehow did not follow the rules of the war. Among the more memorable ones were : they killed after sunset saying that there was an eclipse; they killed people without weapon like Karna; they made use of a eunuch to pretend as a woman and hid behind it; they killed Drona while drowning in sorrow because they said that they’ve already killed Aswathama, his son, but in reality, it was an elephant named after his son; they killed Duryodhana by hitting him with mace below the belt etc…

They somehow followed their Dharma, as per Krishna’s orders. There were so many periods whereby Yuddhistra and Arjuna were already questioning the methods that they were using but they continued on believing and listening to him.

By the end of the book, Krishna began questioning himself and his methods as well. He decided to make Jara kill him using his own bow.

Of course, my favorite lines:

“Bharatavavarsha, despite its great warriors, its ancient civilization and refined culture, its accomplishments in arts, science and architecture, would collapse like a house of cards before the onslaught of something primeval as the force he was witnessing. A country obsessed with who was untouchable and who was not, who could eat with whom, who could love with whom, who could stand how many feet from whom, and who could learn what, did not stand a chance before a people who ate from the same bowl. “ – Pg 103

“ All my acts are selfish, including our friendships, Karna. Every act of love is selfish. I believe that when the time comes, you will stand by my side. So will Jayadratha, Aswathama and Sushasana. I believe that all my brothers will stand by me, not because I am righteous or the epitome of dharma, which I am not, but because you love me as a man and a friend……” – Pg 140

“Any possession is sin for a Brahmin. Tell him that any attachment will lead to disaster and heartbreak.” – Pg 162

“ ..I have clothing to cover my nakedness. I lack nothing. I do not beg for myself, I beg so that men do not forget kindness and compassion. There are different kinds of works. Work for the sake of result is not worship. Work unaffected by result is true worship.” – Pg 164

“ How have you allowed such atrocities, Karna? I have never seen such a madhouse in my life. Forget human beings, they have even graded animals and trees as touchable and untouchable.” – Pg 176

“Follow your heart, son. That is your Dharma. Do not worry about what the world thinks. The world is transient, but you are eternal.” – Pg 195

“I will not, Swami. Life and death are like day and night, a part of nature. His soul is immortal. It will have reached Vaikunta, at the feet of Lord Vishnu. I cry because I am sad and ignorant. May Krishna give me wisdom.” Pg 248

‘ Life is an illusion only for you, Krishna’

‘The entire universe is an illusion – maya. Life is just a dream.’

‘The pain of life is real, the joy of living is real, and the myriad emotions that make life worth living are all real.’

Krishna smiled, ‘ Brother, the wise do not grieve for the dead, nor the love the living. The soul is immortal and pervades the entire universe. He who thinks that his soul is killed when his body is slain, is ignorant. The soul has no birth or death; it is unborn, unchangeable and eternal. Only the body perishes. Just as we throw away old or soiled clothes, the soul discards the body’ “ Pg 282- 283

Krishna and Balarama on Caste system.

“ ‘I have never sanctioned the crushing of one caste by another, brother. It happens as an abberation and will be dealt with later. A free society without rules is bound to self-destruct eventually. No creature is superior or inferior to another, but each has its own function in the natural order. So has caste.’

‘ It is a beautiful theory but impossible in practice. Prejudice is born when divisions exist.’” Pg 284

Krishna and Balarama on Karma.

“ ‘ I do not understand, Krishna. A man does wrong Karma and is then born as a beast, say a buffalo, but can we find anything more serene and detached than a water buffalo? It is indifferent to rain, sunshine, dirty water or dry grass. It is the picture of total contentment. Except for the physical pain or pleasure, it does not worry about the results of its actions. Does that make the buffalo the supreme yogi? If it does, it should achieve moksha and not be reborn ‘ Balarama waited to see what his divine brother would say.

‘….Brother, a man’s concern should be about his karma, not the fruits of his action. He should be devoted to his work without getting attached to it, and be equally impervious to success and failure.’ “- Pg 286

Krishna and Balarama on possessions.

“ ‘ So desire and passion are the greatest evils of man? ‘

‘Krishna, from desire, life is born. From attachment, love. From passion, beauty. From compassion, humanity. Desire is the very foundation of nature.’ “ -Pg 288

“ ‘ Carvaka, I have no great philosophy to offer except that of love. I know no mantras except that of peace. I am not an avatar, but an old man in a dhoti; an insignificant man in a land of dazzling Gods. But I will not give up. I will return in every age to walk with my children. I do not seek moksha from that. I have only one simple wish – to return to my country whenever she needs me. ‘ “ – Pg 295

“Partha, just as boyhood, youth and old age are in one’s body and manifest themselves at the appropriate time, so is death. But what dies is born again. That is the eternal law of karma. Death and birth are like day and night. Do we mourn the night when we rejoice at the birth of a new day? To the wise, just as day and night are part of nature, so are life and death.’ “ –Pg 342-343

“ Do not get attached to the results of your work. Be devoted to the work alone. Misery is an illusion.”- Pg 345

“ Suyodhana needed to believe in Karna’s sincerity in order to find meaning in his life. No, he could not believe Karna did anything for selfish reasons. He would win the war for them. They all shared a common dream of a better tomorrow for Bharatavarsha- he, Aswathama and Karna. If one of them betrayed another, life would not be worth living anymore. He had to bury all doubts. If Karna proved to be a self-serving man, then what’s the point of winning?” – Pg 408

“ Karna, the man whose life the Gods were fond of playing dice with ; the man who had chosen to remain a low-class Suta when an empire was offered to him on a platter, died in his friend’s arms. The war lost all meaning for Suyodhana.” –Pg 421

“ Arjuna, time is God, time is Dharma. Fame, victory, wealth, infamy, defeat, poverty – all are but manifestations of time. “ – Pg 484

“ Death was the great equalizer, it did not differentiate between a princess and an untouchable. “- Pg 496

“There is nothing either good or bad but thinking makes it so.” -Pg 512

These epics make me think even more about my percept of good and bad, right and wrong. Indeed, there are no such things. Only our minds and dispositions make them. We should always look on the other side. Other’s actions and beliefs may be different from ours, but if we dig on it more, our motives and the fuel that sustains the fire within us could be the same. 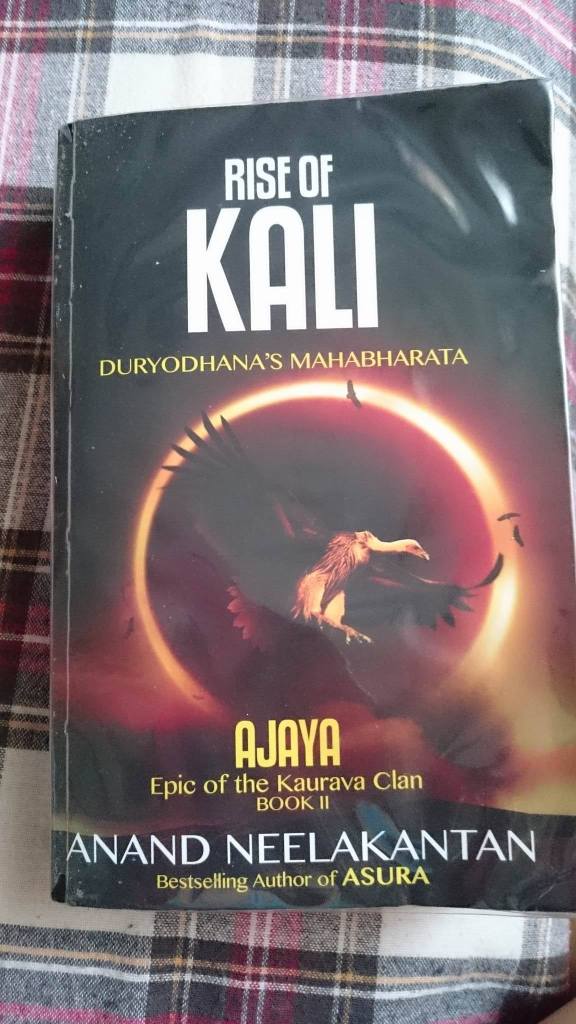