When in Hanoi, Vietnam

We reached Hanoi and I was feeling a little nostalgic. Today, they all will be flying back home, while I have 2 more days to spare in the city. We had breakfast near the train station, pho then coffee at Highland coffee, then they bid me goodbye.

First mission was to cross the crazy street and find the hotel that I booked through Agoda, Hanoi Ciao Hotel..ALIVE. According to my map, it was just less than 2km from where I was, but the number of streets to be crossed was really intimidating. Everytime I would cross, I felt like I was in a computer game trying to fight for my life while avoiding the cars and motorbikes. Everytime, strangers would cross, I would feel relieved, they’re my savior. I’ve never felt so blessed by just making it alive crossing the streets.

I found it. They said there was no room available yet because check in time would be 1-2pm, which was understandable. So I decided to hang around. They gave me a welcome plate of fruit and tea, allowed me to use the shower and internet too.

After charging my phone a little I set of. My plan for the day was to just have a walking tour of the city, to eat decent meals and to have a massage later on. I walked towards St. Joseph’s Cathedral and then towards the Hoa Lo Prison Museum (30k VND).

Then along the way, I also dropped by the Police Museum (free entry) and the Quan Su Pagoda before my first meal alone at Quan An Ngon. My friend recommended that restaurant and I was determined to try what they had to offer. All by walking, I found the place, I ordered Bum Bo Nam Bo. It was yummy!

Past 1pm, I decided to head back to the hotel and check-in properly. I walked back, endured the streets and when I reached there……..According the reception, my room was not ready..after a few minutes, they said it’s not available because the family who was supposed to check out my room was not able to check out because their child was brought to the hospital. Hmmm so they had to transfer me to another hostel.

The first name they mentioned was Memory Hostel. I sat down, researched about the hostel and couldn’t find anything about it. After typing the hostel’s address, I realised that it came in different names. Return Hostel, Hanoi Funny Hostel, Hanoi City Center Hostel, Hostel 19 Bat Dan. I have no idea why. Of course, I was scared. Should I or shouldn’t I agree on this?

Since my time in Hanoi was limited, I told myself that I shouldn’t hassle myself anymore about accommodations, anyway, I wounldn’t stay there the whole day. I would only need it for sleeping and actually, I can sleep literaly anywhere so long as my back is on something. So, without further checking, I just decided to take it.

The staff of Hanoi Ciao Hotel brought me to the hostel by motorbike. Now farther from the Cathedral, I won’t be able to attend the afternoon mass. I saw the hostel and it was way below what I expected. I tried to psych up myself that this thing isn’t a scam or something. I also tried to stay positive despite my disappointment of not getting what I expected to get and the fact that my planned time and all were not being followed.

Personally, I am not very good when plans are changed. I am not flexible enough. However, I could really see that the staff were sincerely apologetic about what happened. They wanted to take me for a city tour by motorbike which didn’t materialize because it suddenly rained and to help me book my Halong Bay tour the next day for service recovery. I also came to know that this hostel where they transferred me in didn’t offer breakfast unlike the original hotel. I told myself, nevermind, this would be my chance to try on real Vietnamese food, so I should really eat out.

After checking in, I decided to walk around the city. I was planning to find my way to the One Pillar Pagoda but it was too far and it was getting really late, hence, I just decided to drop by the Temple of Literature which was also on the way but closer.

I went out of the temple and it was quite dark already. I took the xe-om back to the lake and walk one round along the lake. Shopped for souveniers, had bun cha from some street vendor and coffee from some dodgy coffee shop called Cafe Dinh near the lake . I realised that there were so many fitness activities around the lake and that one wouldn’t get bored just people or performance watching around it. 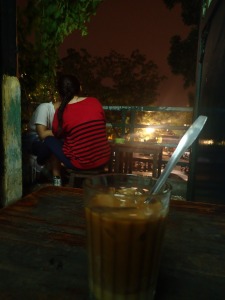 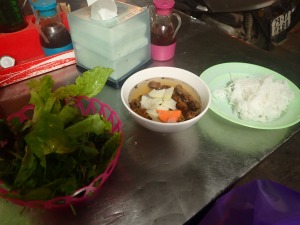 Bun Cha by the street

Exhausted, I hailed a cab to get home. It was late so, I couldn’t anymore lose my way. That concluded my first day by myself.

Hanoi Ciao Hotel’s staff helped me book a day tour package to Vietnam’s famous Halong Bay ($30USD). I had Banh My and coffee from the shop opposite the hostel while waiting for the shuttle to Halong Bay. At about 8:10am, the shuttle picked me up. Seats were relatively comfortable because there were only 11 of us.

Half way, we had a break at one huge souvenier place , and proceeded on with the journey. After three hours of travelling, we reached the place. We took the boat and I sat together with one Indonesian and one Australian couples. I ate lunch and took the bamboo boat with them. I initially wanted to kayak but it turned out I was the only one who wanted to do it within the group. Because I wasn’t confident on my kayaking and swimming skills I decided to give it a miss and just ride that boat with them. Anyway, I had fun with them. We also visited a cave called Heavenly Cave. It was beautiful but It felt artificial already because of the lights installation.

Vendor selling their goods in our boat

Lunch with the couples

with the couples in the bamboo boat 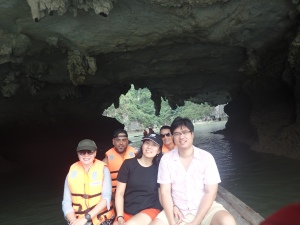 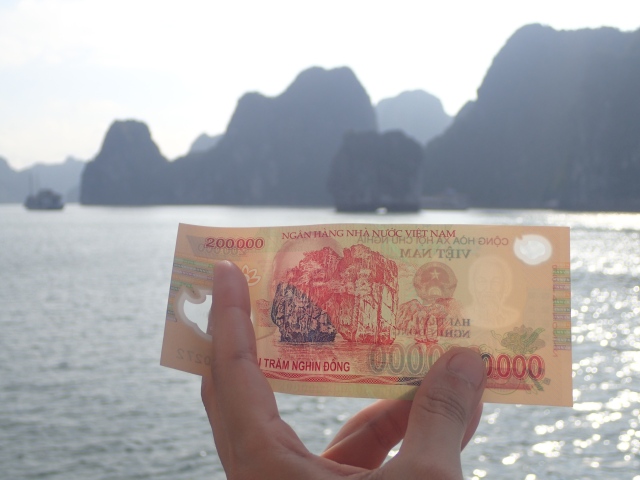 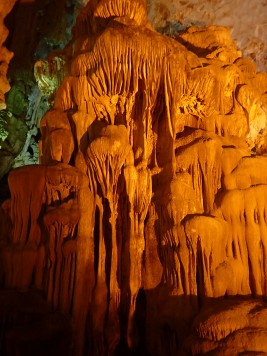 Overall, the visit to this UNESCO heritage site was still as exciting and memorable. Aside from the beauty of the place itself, it’s also because of the beauty of the friendship and knowledge about other culture that was formed.

We reached Hanoi at about 9:30pm. I went for a quick walk around the busy Old Quarter to look for an affordable massage place around the area. There were a lot of food option along the streets. I was hungry but I said no to id because I had a mission to accomplish first. I looked and asked a few massage places and the cheapest that I found was at Lemi Spa. Package was 390,000 VND for steam bath and hot stone massage of 105mins. Of course, one still have to give tip. I wasn’t able to get proper dinner anymore because the massage finished past midnight. I got myself a bag of cookies which ahem…I finished in one sitting, packed and called it a night. 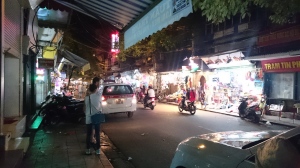 The next day was my flight back home.

Food trip: I’ll go back for the food. I wanted to try all but time was limited.

A night of cruising in Halong bay. I only managed to go for a day trip

Dance galore around the lake. There we so many fitness, dancing and zumba like activities around the lake the day that I walked around it. I am unsure if its a daily thing but it would be a great way to spend a night after your food trip. Haha