Climbing Mount Fansipan , the highest in Indochina, at 3,143 m

Since I am always bored, when my friend, A, told me about his team’s plan of climbing the Roof of Indochina, Mt. Fansipan, I immediately expressed my interest despite the fact that I am not always comfortable to be with people I am not very close with, I still decided to say yes.

On the 7th of November, it was my first time to meet all of them. It wasn’t so bad because they were all very welcoming. I didn’t feel awkward too. Our flight left and we reached Hanoi at about lunch time. Just right for our first meal in Hanoi, Cha ca. I never imagined that stir fried fish and vegetables can be so tasty. After lunch, we all walked around the city until night time while waiting for our sleeper train ride to Lao Cai at 10pm. In between, I was able to try egg coffee too. Then, our organizers arrive and brought us to the train station, gave us some final instructions before we set our foot off to our destination. 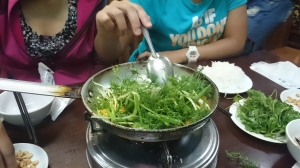 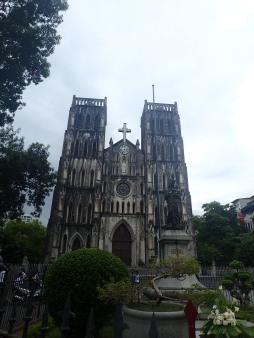 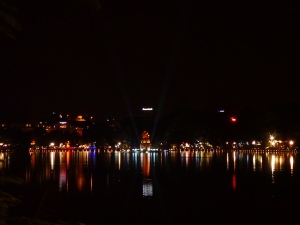 Night view of the lake 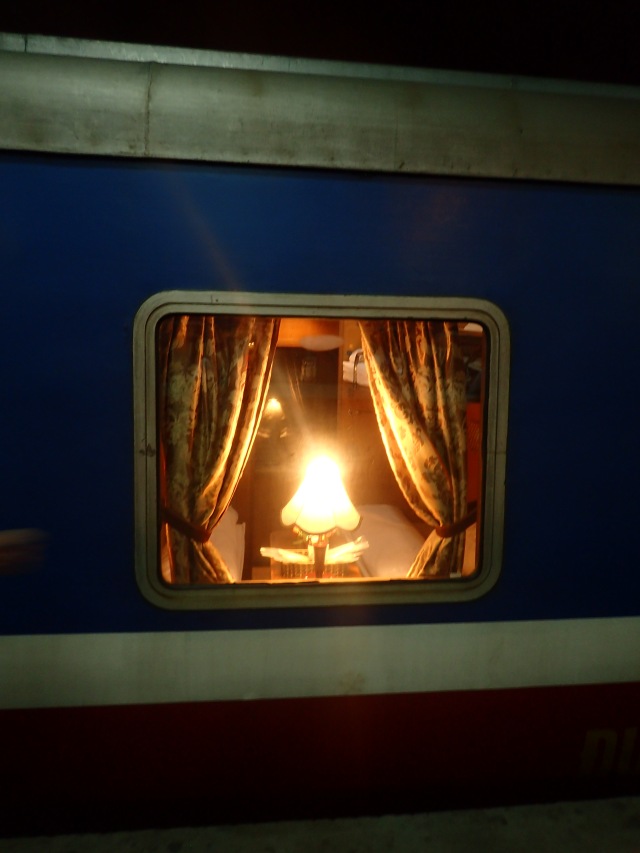 Since there were 8 of us, I was made to sleep in the room of the boys. As always, I’m one of the boys. (yeah! that’s why I am always friend-zoned)

Train ride went smoothly for about 7hours. I was able to sleep well on the top bunk. We reached Lao Cai, drove for about 45minutes to Sapa, our base location. The representative welcomed us and led us to a hotel to prepare and pack-up and to this buffet-style breakfast place to carbo-load before the start of the trek.

We were introduced to our young-looking guide, Cang, too and off we drove to the base for about 25minutes of winding roads with the view of the terraces on the side. We then started our ascent (or descent?) . First half of the day was quite tolerable. It was actually quite easy, until we reached the tepee-shaped insulated campsite to have our Bahn My for lunch. We rested for a while.

After almost an hour of cooling down, we went ahead to conquer the remaining part of the trek for the day. Trail was like playing with my calves, knees, thighs, butt, back and arms. Yes! Almost my whole body was falling apart. haha It was a combination of mud, rocks, clay, streams, ladders (yes!) and worst of all (for me) boulders. There were innumerable ascending and descending motion whereby in some parts, we were made to use some bouldering skills which is personally non-existent in my portfolio of skills. The feeling was like, you were being tricked that we’re near, and then all of sudden, we had to descend big time again, like a 100m of 70-80’ drop. It was so scary. 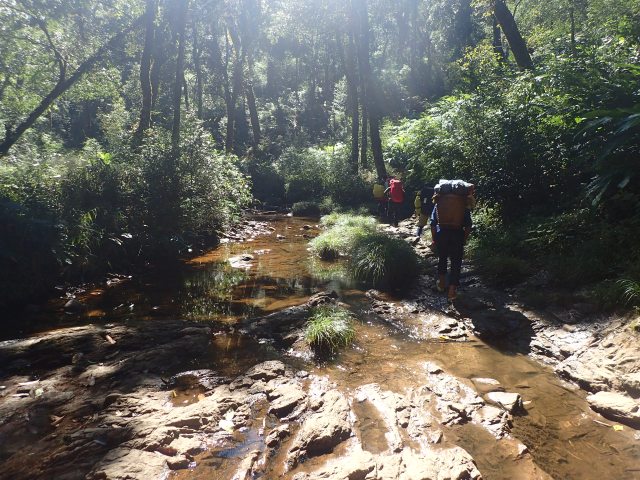 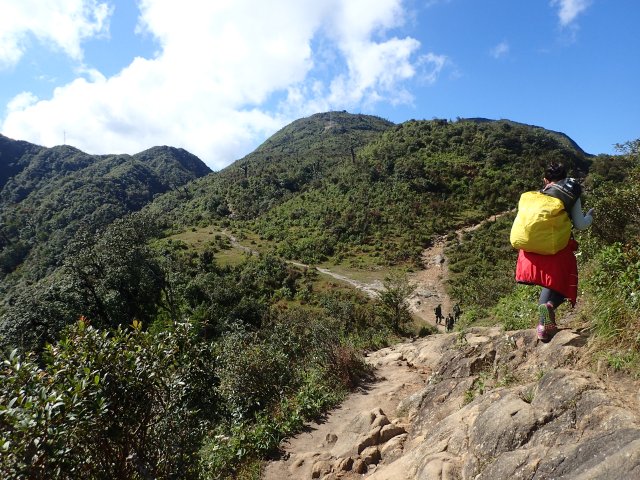 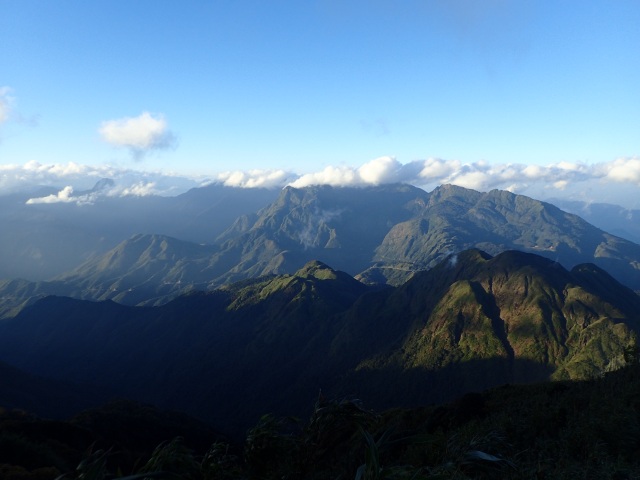 After about 4hours to drudgery, we reached the concrete camp where we would be staying for a night before we go for the summit attack early on the next day. We cleaned up, had our sumptuous dinner and that concluded the day.

Since we all agreed to watch the sunrise, we had to wake up at 2am so, we could set up and run after the perfect view of the sun saying good morning to the world. The 4 hour trail to the summit was the same as the last afternoon’s trail, only you’d have to do it in the dark. It was worse for most but better for me because I couldn’t see the cliffs clearly, hence, I wasn’t very scared. The last leg of the trail was a construction site and a few hundreds of concrete stair steps. They were making a cable car to the top. It was a good thing that we were able to climb it before the cable car opens in a few months’ time. Or was it a good thing?haha I couldn’t say for sure, especially after what we had to endure and experience to climb up there.

Summit! After 4hours of joking ourselves, ascending and descending, we reached the summit at almost sunrise. We stayed up there for a few minutes. Took a lot of pictures of that golden triangle that shone even brighter when the sunrays kissed it. Then we all decided to descend. I thought, Can I just call a helicopter to fetch me? Haha 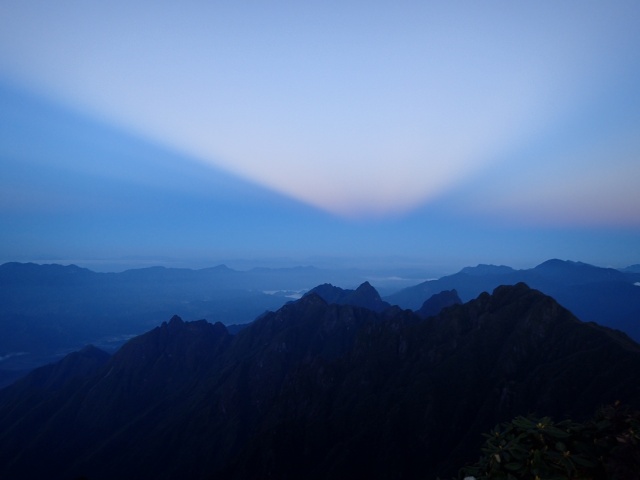 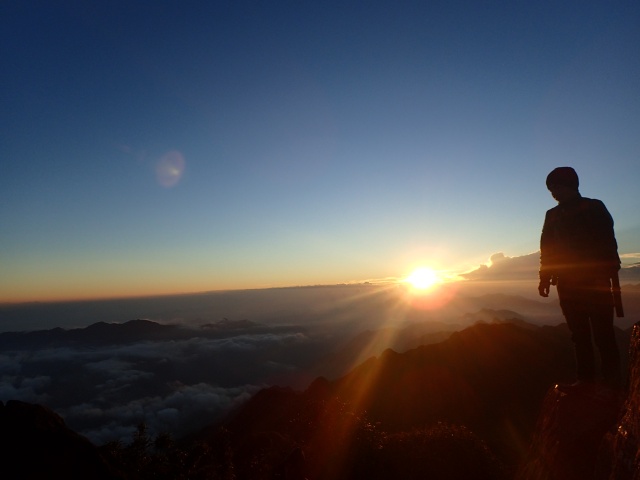 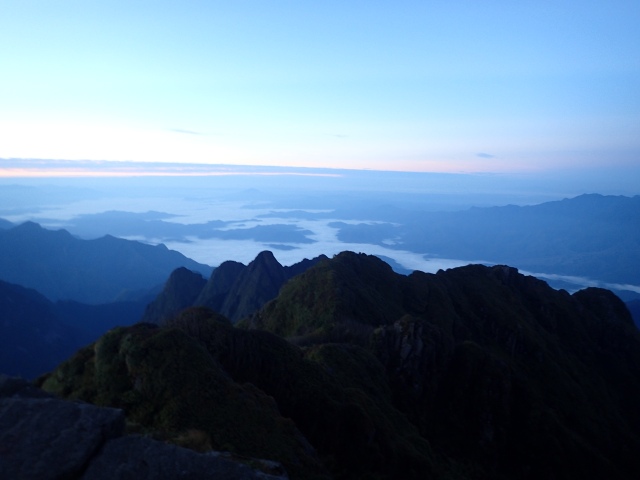 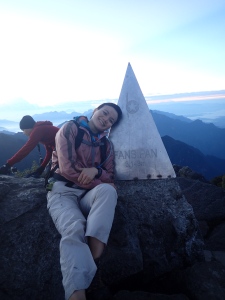 Unfortunately, I couldn’t. So my knees, butt and my heart were again tortured like crazy. I could see the cliffs and I could feel the fear…yet I continued on anyway.

We reached the campsite again. Had our newly prepared breakfast, prepared for a while and headed off to our descent. Same trail, same hardship, same feeling of accomplishment every time I could safely boulder my way out off those huge rocks by the cliffs. Ahh..

After about 4-5hours, we reached the base and we had to rush back to Sapa to meet up with the rep again. She allowed us to use the shower of the hotel where we stopped over the day before. We had to rush out of Sapa too, hence didn’t have much time to see the place. Sad because it looked interesting and so lively.

After shower, we drove to the Lao Cai train station again, had our dinner in a nearby restaurant and off we again took the sleeper train back to Hanoi…. 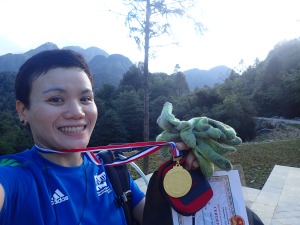