We all excitedly met up at the airport for our flight to Lombok. It was my first time to meet most of the people from this trip, but I wasn’t worried because I knew two people, N and Z (my roomie for the whole trip), and that was enough for me.

Our flight went smoothly. We arrived in Lombok at night and met up with Am from http://lombokglobal.com/, our tour provider. We didn’t really do much for the night. We just had dinner at a local warung, where I ate something I couldn’t identify, but I ate it anyway because it tasted very good. Then, we went straight up to our night’s accommodation, Lembah Rinjani Homestay.

The next day would be the REAL beginning of our wonderful journey to the summit, crater rims, crater lake, beautiful islands and to developing new friendships….

Call time was at 7am for us to have breakfast. After enjoying their famous fried rice with egg, and completing all the necessities, we headed off to the jump-off point. People from different groups crowded the area. All of us were having the same goal of paying respect to the summit of Mt. Rinjani.

First few hours of our first day was a piece of cake. Except for the increased temperature brought about by the uncovered trails, everything went quite easy. We had veggie-soup and rice for lunch which suprisingly, tasted very good. It was fortunate for me to like the food and have eaten as much as I could because the second half of the day’s route was a killer. It was a few hours of just purely ascending paths.

Before the climb, I didn’t go for some serious uphill kind of training for my legs, and I knew I would pay for it and payment came with interest.. My legs were literally shaking when I was almost at the top of the Sembalun Crater rim. Good thing, a kind soul was behind me, PM. She kept on motivating me to carry-on. Finally, after drudging for about 4hrs, before sun set, we reached the rim. It was beautiful up there. The breeze kept of kissing my wind and sun dried face, and I loved it.

Torture started at 2am. We had to endure the slippery combination of dry soil and sand, enhanced with our extreme sleepiness. With my headlamp on, walking like a zombie in the dark, I tried so hard to keep myself awake because the trails were most of the time, narrow. The wind was blowing strongly touching my already sleepy eyes and it made me want to just close my eyes and strike in any safe and available spot to doze off. But hey, I couldn’t do it..I shouldn’t…

I continued on. I walked the seemingly endless path towards the summit. As usual, it looked too close but still mechanically so far. I’ve always forgotten how tough climbing mountains are until am currently experiencing it again…then I would remember…the hard way again.

Sunrise came, I was still midway to summit. I reached few minutes before 7am. Despite sun was already staring right up at me, it was still very cold up there but I really didn’t care much. I took as many pictures and waited some more for my friends to achieve what I just achieved.

After more than an hour, we all decided to descend. This time, the steeps and cliffs on both sides were more apparent and visible, hence, as expected, I felt that ticklish sensation on my forefeet again. It was scary to come down. Marlene, the guide helped me get through my fear. He walked by me along this scary descent.

After the summit, we had our breakfast then a few minutes later, lunch. I rested after these tummy-filling meals while waiting for my dear roomie, Zi. They came back past 1pm. Half of the group decided to go ahead and trek toward the crater lake. Half decided to stay a while and head off a little later. I was part of the second half.

When we were about to start our descend, rain suddenly decided to make things a little bit more complicated for us. It made the already, steep and rocky terrain even more arduous to overcome. As usual my fear of height sets off. Most of the people from this second group came back late from the summit, hence, a little bit tired. We all walked slowly until the sun decided to expire. We arrived at the crater lake camp already at night. Had our dinner, cleaned up and went deeply into my dream land.

After breakfast and our usual photoshoot by the lake, we trailed towards the Senaru Crater rim. First few minutes was a walk along the beautiful shore of the lake. View was perfect and it made me want to breathe as if meditating. I cleared my head, I touched the dewed leaves and weirdly squeezed and enjoyed the moist coming from them because it rained the night before. 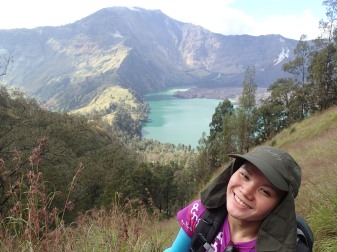 Then, good things came to end so soon as we entered the tree covered trails. From then, trails were mostly going up and up and up. We were required to use my non-existent ability to do rock-climbing because the rocks we had to pass through were almost vertical. While climbing up, the view of the lake from atop was clearly visible most of the time. It was a view to behold, like a play or movie we ought to watch, only this one didn’t have to move. The more still it was, the more captivating it became. Unfortunately, the show ended when we reached the top of this crater rim. The clouds decided to close hide the lake from us. We couldn’t wait for the next time it’d show up, we headed down to our lunch spot. Just worth mentioning, that day’s lunch was the best meal for me. It was spaghetti cooked with a mountain of mouth-melting cheese. Yuuummmm

Lunch was my favorite while after lunch was my most hated part of the hike. The path consisted mostly of dried soil and it was so so slippery. My butt literally kissed the ground multiple times. It was painful. Special thanks to the people who patiently waited and guided me, C and PM again.

Reached the camp before sunset. It was our last night staying in these uncomfortable accommodation. However, I felt kind of sad leaving a world that made me experience how life is again without the things that I taught I need, when I fact, I do not.

Anyway, a group of us stayed a little while in front of the campfire and jammed. Together until we decided to take a rest.

Day 5: Descent and a waterfalls

I decided to take it really slow coming down. I wanted to experience the forest for as long as I could. Sadness engulfed me when I saw the village, but hey, we were heading to Tiu Kelap waterfalls, so sadness was quickly replaced with excitement.

My legs were already aching, while we still had to painstakingly endure the stairs coming down to the waterfalls. Current was strong as we tried to cross from one part of the falls to the other. I was freezing hence, didn’t get to enjoy as much as I wanted to. Coming out, instead of climbing the stairs back up, we decided to use a short-cut to the gate of the falls, a pitch-dark tunnel/waterway. From there, we had out lunch.

After lunch and changing we drove for about two hours to reach Mataram port. We were heading up to Gili (Trawangan)Island.

We arrived at Gili past sunset. Every one was tired and it became pretty apparent in our own little ways. We had dinner and then rested after that. Tomorrow, I had to decide on whether I would commit suicide or not, would I go snorkeling or not?