12 Oct : The view during my plane ride from Frankfurt to Innsbruck was breath-taking! I wished the ride was longer but (un)fortunately, I had to arrive in Innsbruck Sunday lunch time, therefore I had plenty of time to explore the old town and walk around the city. I saw and went into 3 different churches : Jesuit Church; St Jacob Cathedral and a small pink church at Marien-Therisien-Strasse . I attended a Sunday German mass at the Jesuit church as well.

My first impression of Innsbruck was, WOW! The mountains looked so close that I wanted to climb each one of them. Despite the shops closed very early because it was a Sunday, I still did enjoy my exploration even without taking dinner.

13 Oct: Breakfast was sponsored and it was buffet-style. As I didn’t have dinner the night before, I ate like a mad horse. Suddenly, one lady approached me and asked if I was Filipino. Haha I happily confirmed and I asked her “was is because I was eating lots of rice and bacon that gave my nationality away?” She said yes! Haha She was Filipino too, with a US citizen hubby and they were on European tour. We promised to keep in touch and have breakfast again the next day.

That day was the beginning of a week long workshop. It was interesting but of course, I would have to admit that if it was done outdoors, it would have been even more fascinating. After the day, MEDEL, organised a city tour for us (places that I had already visited the day before) and a dinner at Golden Adler where I had according to them, their specialty, deer meat.

14 Oct: As promised, I had breakfast with the couple again. Theu were kind and sweet actually. In the afternoon we were given a tour of the MEDEL office. They’ve huge windows which looked like painting frames because the ouside views were the pictureque mountains of Innsbruck. If that was my offuce, I think I wouldn’t be able to work because I would definitely just be drooling and staring at the window all day long.

I had a free night after the headquarters tour. I decided to go up the Hungerburg via funicular to check out the spectacular view of the city from up there. It was beautiful. I then had to take Bus J at Eu 2.00 to go down and joy rode until the almost the end of the bus’ destination. I decided to just cut my ride short because it was getting dark already.

In the hotel, to conclude my night,  I went for a run at the gym.

15 Oct : No more breakfast friends. They have moved on their journey. I on the other had had to stay and endure the workshop for a few more days. Everytime, there’s a chance like breaks, I would go out and walk around. I dunno, but it looked different everytime I went out, especially the mountains. They were dancing with the sun, I think.

Before the MEDEL-arranged diiner, I walked around to find one pole school in Innsbruck which I unfortunately, failed to find despite standing at the middle of the correct strasse already. We had to meet at the Hotel lobby to walk towards the Flo Jos Masi where I had a huge slice of steak with potato. 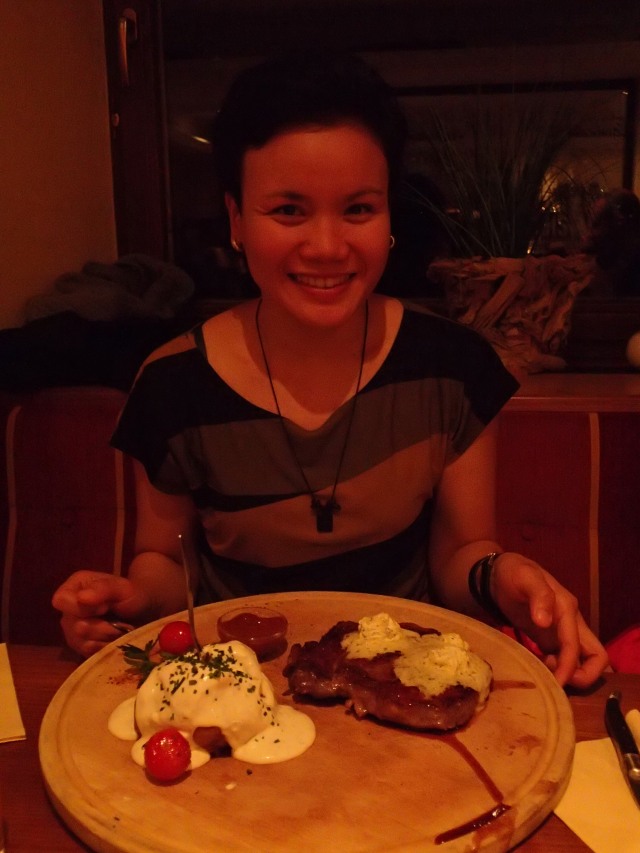 16 Oct : I decided to jog outside (in singlet, ehem, feeling local in cold weather) for 30minutes. It was to see how the mountains are like during sunrise. There was no obvious sunrise because it was drizzling that morning.

In the afternoon, MEDEL organised a free tour of the Audioversum Museum. It was kinda cool. Haha

That night, I accompanied one audiologist from the BAHAMAS, baby! To go shopping. She’s an out-going woman with a lot of stories to tell. I am not particularly good in dealing with people I just met, but she was different. I felt comfortable with her.

After shopping, I entered the Jesuit church again to supposedly express my gratitude to the blessings I was receiving, then suddenly, the mass in German started. I just decided to stay up, finish it and worship. So, while in Innsbruck, I’ve already attended 2 masses in German in a span of 5 days.

The mass concluded. I then had to meet with my friend audiologist from Singapore and her hubby for dinner at Stiffskeller where I tried their famous Egg noodle in cheese. It wasn’t the egg noodle I was expecting nonetheless, it still tasted good.

17 Oct: Last half-a-day of the workshop. After lunch at the hotel, K, my friend who’s working with MEDEL, accompanied me to go inside Hofburg Palace and sent me to the train station because I was already heading out for my (partially) solo European adventure….I was going to Salzburg by train.