I was lying when I said I will never do it again…Because, there I was, again, running a full marathon. This time, with a goal of not just finishing, but finishing without pain (unlike the first time).

But, hey, it was at night. When I joined, I knew that my main enemy would be my sleepiness (just like the LTAW). The wind and rain at East Coast Park were like tranquilizers. The sound of the beach was my sedative. I was half-awake, half-asleep, like zombie trying to scare the world of the living.

The wind was chilly and it stroke directly to my bones. I think, I might have also suffered from PMS, because my migraine was bad, my ribcage was aching, my hipbone felt like it was about to give way and my coccyx felt like I was going to pass motion but there was nothing.

I started hallucinating (or dreaming), I saw ex’s face, then his fiance, then their wedding, then my lacrimal gland was active. I had to keep control, and it caused me more migraine and heart-ache too. At East Coast Park, I wanted to quit! I wanted just to hail a cab and go home but…I didn’t bring money! Darn!

At 21Km mark, I started walking. I walked comfortably, sat at nearby benches, enjoyed the sound of the beach, stretched a little and munched on the gummies I brought with me. At 30Km, almost coming out of ECP, no more beach, yeah….I was back to my energetic and hyper self. I thought, I had to run again and that’s what I did. I strongly ran until the end. Woootss… at 42km mark, I was still running. I finished strong and crossed the finish line, FREE OF PAIN!!!!! yipee!

I succeeded. I finished without much pain unlike the first time. I think, based on the finish time, I crossed after about 6hrs 45mins (not sure of my net time yet). It was about the same as my first attempt. No improvement in time but there was for my after-run physical state. Yey. It was not anymore as traumatic as the first.

After the run, I headed back to the baggage collection area. Noel was early. Phil took so long, I was starting to worry about him. But, after 1.5hrs of waiting, he appeared at the meeting point. He and Pankaj, also finished the race.

We had a Happy Sunday, indeed. Thanks to Phil and Pankaj for the company and Noel for the support. I love these guys! 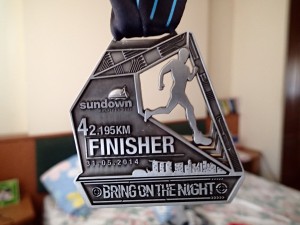