This entry is rather delayed. I was busy the whole week and I couldn’t find time to write something about a milestone…haha running milestone! I did and finished my first marathon last Sunday. I’m so proud to say that I already have one under my belt and I guess, after that torturous ordeal I have experienced during the run, it would remain one for the next couple of years or maybe this lifetime.

I wasn’t able to seriously prepare for this race. I did ran every now and then, but the farthest run I had for training was 15km , 2x a week, when my yoga instructor said one month before the race, that I should be clocking in 70km per week already. I lacked time to train because aside from running, I still have yoga, krav maga and pole classes.

Two weeks before the marathon I had to focus planning for my Hyderabad and Kerala trip hence, I had lesser time to train. A week before the marathon was my trip to India and I was only back the day before the race. I was tired and I wasn’t sure if I would be fit enough to be able to complete a 42km race injury-free or alive. The night of my arrival back to Singapore, I prayed and decided I should join and conquer this fear.

I woke up at 3am on the race day. I’ve never eaten as much pieces of bananas my whole life but I did the day before and the day itself. Put on my usual compressions, sports bra and hailed a cab towards the baggage deposit. Deposit would only be on going until 430am, according to the booklet but they extended it anyway.

I met up with some friends and some were still late hence, we waited for them and started quite late. 5:30am+. First 24km, I was running at my normal pace. No aches yet. When I reached 25km, suddenly my legs were so painful. It’s the kind of pain that made me want to cry, but I kept myself together because I was kind of shy that my image might get caught in photos. I controlled and followed an old man with music in loudspeakers. He was singing while running and following him kept me going, stopping at every point there’s tiger balm being offered. I’ve never used as much tiger balm in my whole life. I thought, runners nowadays are given such benefits. I doubt it if they had such things in the olden times. I gained more respect to those who could run 42km without it.

I also started thinking about my parents, my ex, my future, my friends, food, munching away the two packets of m&ms I brought with me in case I get bored, with the hope of distracting my mind to ignore the pain but these didn’t help..lol

32km was the point my legs were excruciatingly painful. My breathing and cardio were still ok but I just couldn’t bring my legs to move anymore. I started to walk from then to the finish line. I wasn’t completely satisfied with just finishing the race, I wanted to finish strong… running and not walking. I’m happy with completing the race and my timing was not so bad for a first timer too. If I got the same timing running the whole race at the same pace, I would have been more content but I didn’t.

Anyway, it’s gone and done. Lessons learned the harder way sticks to the head better. I thought, next time I should train more seriously to reduce the pain and to finish strong. =)

—
Baggage collection was also a torture. It was located far-off from the finishing point and to add to the agony, the escalators towards the area were not working. Everyone seemed to be limping like me. Anyway, Kuya N went to the venue to express his support for our first Marathon. We all had lunch together before we went back home.

—
After the race, my legs were still awful until the next day. I decided to go and attend yoga for stretching. Surprisingly, I felt really good after the session and then the day after that, I woke up free of pain. I was amazed that it only took me a day to recover.

Well, that was basically the story of my first full marathon!=) 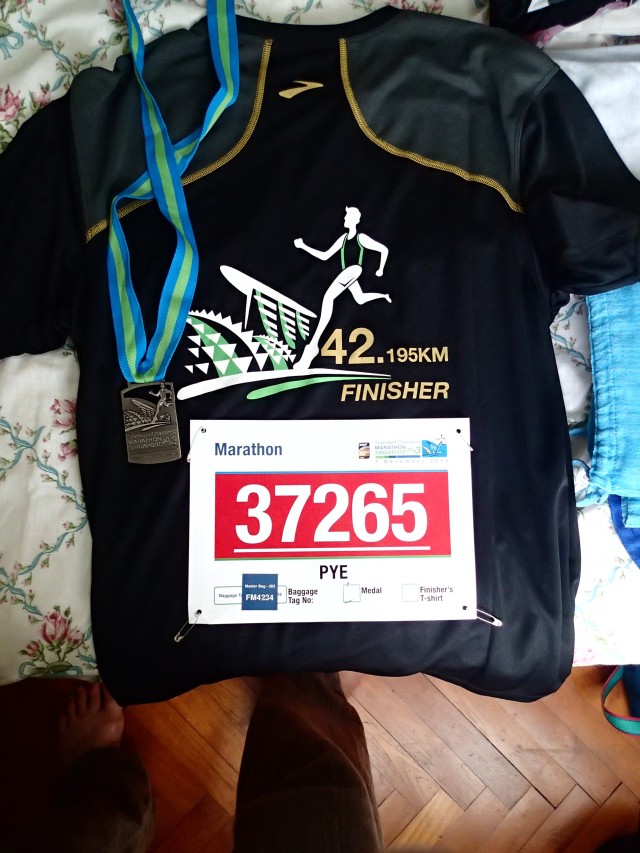